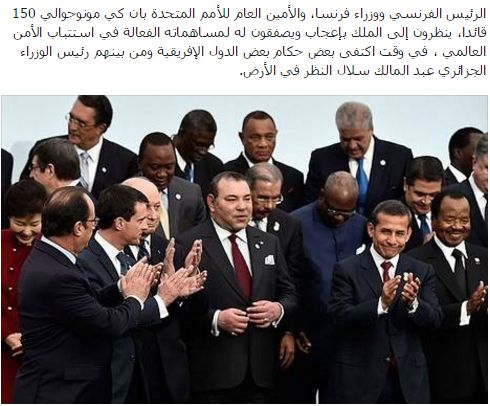 A lot of wrong information has spread recently among social media users in Morocco in the wake of King Mohammed VI’s participation in the twenty-first session of the Conference of the Parties to the UN Framework Convention on Climate Changes (COP21) in Paris.

An example of that is the commentary written by many Moroccans on social media reacting to a photo showing world leaders applauding King Mohammed VI.

Some Moroccans said, as a screenshot underneath taken from a Facebook post of a Moroccan social media user, that world leaders were applauding the Moroccan monarch because of Morocco’s cooperation with various leading countries to foster peace in the world, while others said they were thanking him for Morocco’s cooperation in averting a second series of terrorist acts in Paris.

It is true that Morocco provided intelligence information that was used by French security officials to avert a new wave of terrorist acts, yet that has nothing to do with around 150 world leaders applauding King Mohammed VI of Morocco.

The truth is that Morocco will host the next COP, the 22nd one as King Mohammed VI stated himself in the address read out by prince Moulay Rachid, meaning that on the protocol level, the representative of the next host country, King Mohammed VI in this case, had to stand in the middle of the pack of world leaders for the end of the summit group photo. And then when the group photo was finally taken, Morocco was announced as the next host, which triggered everybody to start applauding.

“Allow me to say frankly that it will no longer be the case because the Paris Conference, and the one my country [Morocco] has offered to host in a year’s time in Marrakech, will be instrumental in shaping the future which we are duty-bound to bequeath to our children,” King Mohammed VI’s address to COP21 world leaders read.