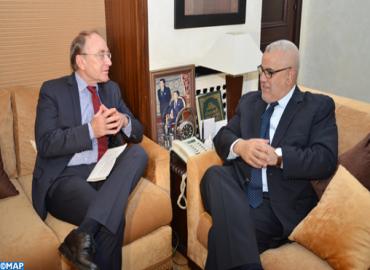 Government chief, Abdelilah Benkirane held on Tuesday a meeting with president of the UN Human Rights Council, Joachim Rucker, currently on, a working visit to Morocco.

Rucker welcomed the level of cooperation between Morocco and the Council and the Kingdom’s precious contribution to the study and success of several human rights issues, currently being examined by the Council, says a release of the head of government’s office.

He also congratulated Morocco for the “great success” of the global human rights forum held in Marrakech end of last November, expressing great interest in Morocco’s outstanding experience of the Equity and Reconciliation Commission set up in 2014 to settle serious past human rights abuses.

The head of government recalled Morocco’s irreversible choices in human rights issue and initiatives to consolidate gains in this field and entrench constitutional freedoms in the daily life of citizens, as part of the Moroccan model, based on attachment to the national Arab and Islamic identity and on the values of freedom, tolerance and openness.

The meeting also reviewed new gains stipulated in the Moroccan constitution, adopted by referendum in 2011, in matters of human rights and public freedoms as well cooperation prospects between Morocco and the Geneva-based council.