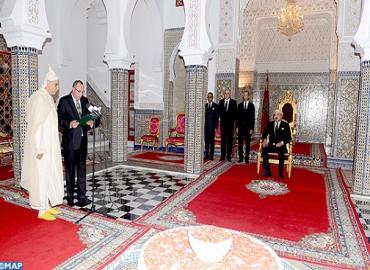 HM King Mohammed VI received, on Saturday at the Tétouan Royal Palace, the presidents of the Kingdom’s twelve regions who were elected following the local and regional elections dated Sept. 4, said a statement by the Royal Office.

The sovereign also received walis whom he appointed, according to the Kingdom’s administrative division, during the council of ministers chaired by the monarch on Tuesday, Oct. 13, the statement said.

During these audiences, the regions’ presidents and walis swore allegiance before HM the King.

The royal audiences are part of the implementation of extensive regionalization, laid down in the Constitution as a democratic choice to manage regional public affairs, aimed at a qualitative change in the mode of territorial governance, the development and modernization of state structures, and the promotion of integrated development, while respecting the principles of transparency, efficiency and responsibility, said the source.

They also mirror the royal will to ensure the success of this large-scale project, through the reinforcement of coordination and cooperation between authorities, public establishments and elected local and regional councils, each according to his prerogatives, to serve the general interest and as part of a community-based policy to meet the expectations of citizens, it added.