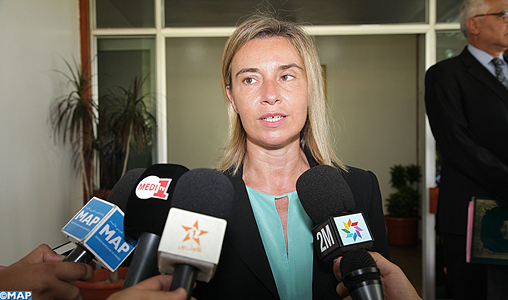 Morocco is Privileged EU Partner in Security, Fight Against Terrorism and Migration

Rabat – Morocco is a privileged partner of the European Union (EU), especially in the area of ​​security, prevention and the fight against terrorism as well as in migration management, said Tuesday in Rabat, the High Representative for Foreign and Security Policy of the EU, Federica Mogherini.

In a statement to the press after her meeting with the Interior Minister, Mohamed Assad, the head of European diplomacy, on her first official visit to the Kingdom since she took office in November 2014, praised the action of the Moroccan government, especially in favor of cooperation with the Union.

During her visit to the Kingdom, Ms. Mogherini will review the privileged relations between Morocco and the EU and will discuss ways to deepen bilateral cooperation particularly in the economic, migration and security.

She had talks with several Moroccan officials focused on democratic reforms implemented by the Kingdom and the political and financial support provided by the EU to support reform process in Morocco.

The talks also focused on the ongoing review of the European Neighbourhood Policy (ENP) and the role of Morocco in the new ENP.

Emphasis also put on some topical international issues of common interest such as the Libyan crisis and the situation in the Sahel region and the Middle East.

South Africa One of the Most Notorious Corruption Outbreaks in Africa