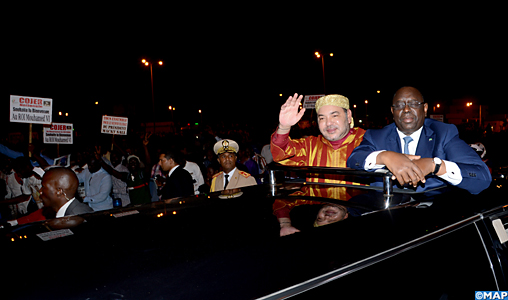 Dakar – His Majesty King Mohammed VI arrived late Wednesday afternoon in Dakar for a working and friendship visit to the Republic of Senegal, the first stage of an African tour that will lead the Sovereign to Guinea Bissau, Ivory Coast and Gabon.

At His descent flight at the international airport Léopold Sédar Senghor, HM the King was welcomed by the Senegalese President Macky Sall.

The two leaders were then won the grandstand to salute the national flag to the sound of the national anthems of both countries, while a salvo of 21 gun salute rang welcoming the arrival of His Majesty the King.
Afterwards, HM the King and the Senegalese Head of State reviewed a detachment of the different bodies of the Senegalese army which made the honors.

Senegalese President has subsequently been praised by members of the official delegation accompanying His Majesty the King and composed, in particular, HH Prince Moulay Ismail and Sovereign Advisers, Mrs. Fouad Ali El Himma and Yassir Zenagui.
The Moroccan official delegation also includes Minister of Foreign Affairs and Cooperation, Mr. Salaheddine Mezouar, Minister of Endowments and Islamic Affairs, Ahmed Toufiq, Minister of Economy and Finance, Mr. Mohamed Boussaid Minister of Agriculture and Marine Fisheries, Aziz Akhannouch, Minister of Equipment, Transport and Logistics, Mr. Aziz Rabbah, Minister of Industry, Trade, Investment and the Digital Economy, Moulay Hafid El Alamy, the Minister of Health, Mr. El Hossein El Ouardi, Minister of Energy, Mines, Water and Environment, Mr. Abdelkader Aâmara, Tourism Minister Lahcen Haddad and Minister of Handicrafts, the Social and Solidarity Economy, Ms. Marouane Fatema.
HM King is also accompanied by several Directors of public institutions and semi-public, businessmen and VIPs.
After a brief pause at the Salon of honor fat the international airport Léopold Sédar Senghor, the motorcade headed to the place of residence of His Majesty the King in the midst of cheers and applause of a large crowd of Senegalese citizens and Moroccans come cheer the Sovereign and welcome him.

US military delegation Arrived at Cape Draa for “African Lion 2015”