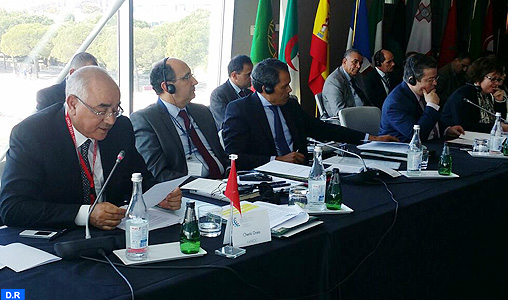 Lisbon – The Minister for the Interior, Mr Drais Cherki, presented Tuesday in Lisbon, the Moroccan strategy for migration management and the fight against terrorism and organized crime.

Mr. Drais speaking on the 16th Conference of Interior Ministers of the Western Mediterranean (CIMO), focused on the peculiarity of the new migration policy, initiated by His Majesty King Mohammed VI and Morocco’s efforts in the fight against terrorism and transnational organized crime, calling on member countries of CIMO to lay the foundations for a genuine partnership based on shared responsibility.

In this sense, the Royal Initiative was a founding step for reconfiguring the various levers of migration governance that is declined through strong actions and openness towards migrants, particularly through the special regularization of situation of foreigners illegally staying in the Kingdom, he explained.

He also insisted that Morocco is the first country of the southern shore of the Mediterranean to have implemented a dynamic model of migration management, as a whole, focusing on the mechanisms of prevention, protection of victims, combating operations against trafficking networks and the securing of land borders and coastlines.

Regarding the fight against terrorism, Mr Drais reaffirmed that unilateral repressive and security action can not in itself constitute a response to the scourge of terrorism and transnational moreover complex.

He recalled in this connection that the Kingdom has taken a proactive and multidimensional approach combining, in addition to preventive and safety aspects socio-economic development, particularly through the National Initiative for Human Development launched by HM King since 2005, and the restructuring of the religious field for better promotion of open and tolerant Islam.

Operationally, Mr. Drais stressed that preventive action of the security services and exchange information with friendly countries, enabled the dismantling of several cells recruitment and transportation of terrorist fighters to homes voltage and abortion of several attempted terrorist attacks.

The Minister pointed out, moreover, that the security challenges call for the adoption of a coherent security policy, concerted among States through the establishment of appropriate mechanisms including the reactivation of the Monitoring Group and national focal points . The objective is to raise the relations between the countries of CIMO at a strategic point in a spirit of partnership and shared responsibility, he said, at the meeting which was attended by the ambassador of Morocco in Lisbon, Karima Benyaich.

The Conference of Ministers of Western Mediterranean, created within the 5 + 5 Dialogue is an informal forum for multilateral dialogue between the countries of the northern shore of the Mediterranean (Spain, France, Italy, Malta and Portugal) and Maghreb (Morocco, Libya, Algeria and Mauritania, Tunisia) on topics related to security cooperation including the fight against terrorism, drug trafficking, illegal immigration and crisis management.

Morocco had already hosted two meetings of CIMO, respectively in April 1996 and October 2005, Hamid Wali, respectively, General Manager of Internal Affairs and Wali, Director of International Cooperation at the Ministry of Interior.