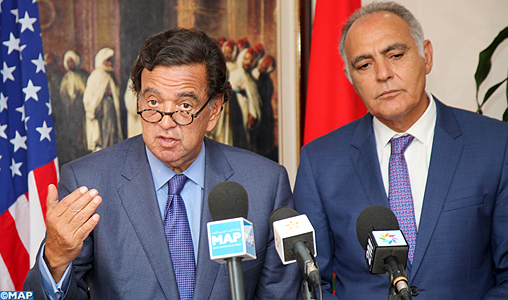 Rabat – The autonomy plan proposed by Morocco is the only viable way to reach a political settlement of the Sahara dispute, said Wednesday in Rabat, the former governor of the US state New Mexico, Bill Richardson.

“The initiative of Morocco, described as serious solution, credible and realistic by three successive US Administrations, is the only viable way to reach a political settlement to this problem,” he said in a press statement after a meeting with the Minister of Foreign Affairs and Cooperation, Salaheddine Mezouar.

“A political solution necessarily mean a compromise solution (…) and a win-win solution,” said Mr. Richardson, a veteran diplomat who negotiated the release of hostages and US soldiers in conflicts in Korea North, Cuba, Iraq and Sudan.

Morocco, he said, “is clearly committed to this approach in order to reach a solution” to the Sahara populations offering “the right to manage their own affairs as an autonomous region of the nation.”

Richardson did not fail to salute in this direction “courageous will” of Morocco to find a compromise on this issue, calling in this regard on all parties to exercise the “spirit” and to “move the before to put an end to this conflict that has caused too much suffering to the families of the region and undermined the stability of the Maghreb “.

MM. Richardson and Mezouar discussed, besides the question of the Sahara, issues related to Moroccan-US bilateral relations, the challenges that stand in the area and possible ways to strengthen bilateral cooperation to face these challenges.

Mr. Richardson, also a former candidate for the Democratic nomination for the US presidency in 2008 and Secretary of Energy under President Bill Clinton (1998-2000) makes a visit to the Kingdom.