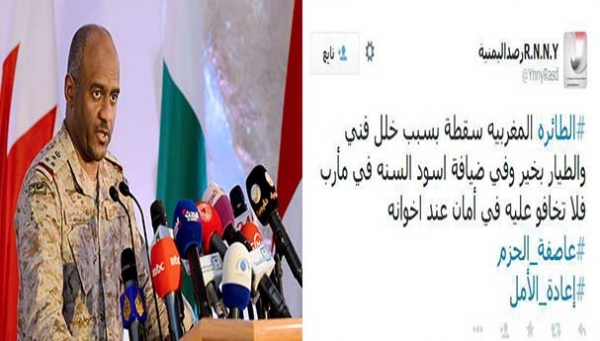 the spokesman for the Arab Coalition “Ahmad Asiri” says in declaration ot Aljazeera, that the Moroccan plane was not shot down and may be crashed for technical reasons, the opposite of what it calls the Houthi groups.

Asiri told the Huthis to assume responsibility for the fate of the Moroccan missing pilot, saying there is a chance for the Houthis and their supporters to demonstrate a minimum of responsibility,that may not given to the again to prove their good intentions, as the area where the plane crashed is remarked by activated number of Houthi groups.

Yemeni media sources confirmed that the plane crashed due to technical fault, adding that the pilot was able to jump before the crash, and resides in the Sunni tribes in Marib.

It is noteworthy that so far, there has been no official reaction confirms or denies the news of the death of the pilot.

US AFRICOM would install ‘cooperative security location’ in Morocco