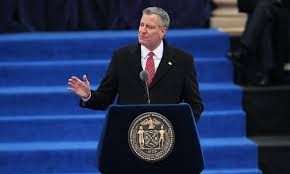 The Mayor of New York, Bill de Blasio decided Wednesday the closure of public schools in the city on the occasion of Eid al-Fitr and Eid al-Adha, from the academic year 2015-2016.

“This is to show respect to one of the great religions of the world,” said Mr. de Blasio when working in a public school in Brooklyn, noting that this decision will come into force at the beginning of academic year 2015-2016.

The city of New York joins the districts of Vermont, Massachusetts and New Jersey who close their schools on the occasion of Muslim holidays.

The Mayor of New York, also said that “the Muslim community continues to expand in our city and public schools,” adding that by announcing this decision, “we recognize that reality.”

Mr. de Blasio has to honor a promise he made to the Muslim community in New York during his campaign for mayor of the largest US city.