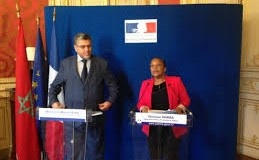 Morocco and France reached an agreement on the amendment to the Convention on Mutual Assistance and recovery of legal and judicial cooperation between the two countries, said a joint communiqué issued Saturday in Paris.

This amendment “very important crowning of discussions begun several months ago by the governments of both countries,” was signed Saturday by the Minister of Justice and Liberties, Mustapha Ramid, and the French Minister of Justice, Christiane Taubira, which met on January 29 and 30 current Paris, said the joint Communiqué.

During their working sessions, the delegations of the two countries, led by the two ministers “discussed in depth the difficulties which led to the suspension of judicial cooperation between France and Morocco.

“The discussions were held in a very constructive and trust, “said the source. These discussions were guided by clear guidelines and the continued commitment of the two Heads of State, His Majesty King Mohammed VI and SE François Hollande, to end this situation and act to preserve the exceptional partnership which characterizes the relationship between the two countries.

” The two ministers, said the Joint Statement, “found agreement on a text amending the Convention on Mutual Assistance Franco-Moroccan to promote, sustainable, more efficient cooperation between the judicial authorities of the two countries and strengthen exchanges information, in full respect of their legislation, judicial institutions and their international commitments.

” This agreement “is an additional contribution to the dense, strong and multidimensional relationship between the two countries,” said the same source, adding that “the two governments will work to its prompt submission to domestic ratification procedures of each party “.

The two ministers welcomed the result and “decided the immediate restoration of the legal and judicial cooperation between France and Morocco, as well as the return of liaison magistrates,” concludes the joint statement.

Addis Ababa: Senegalese President reappointed at the head of NEPAD