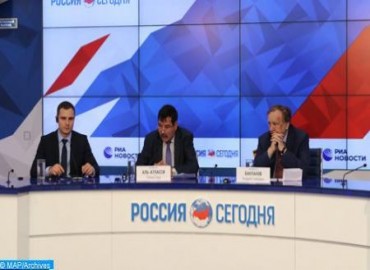 HM King Mohammed VI has, since his accession to the Throne, opened new horizons for Morocco by initiating several structural reforms, said chairman of the Moroccan Peace and Solidarity Commission, Talaâ Saoud Atlassi.

“The reforms launched by HM King Mohammed VI have initiated a new concept of authority, such as the new status of political parties, the new family code and the Equity and Reconciliation Commission, which have opened new horizons for Morocco’s history,” Atlassi said in an interview with the magazine of the Russian ministry of Foreign Affairs, “International Affairs”.

The Sovereign also announced, on March 9, 2011, a deep and structural reform of the political system in Morocco through the proposal of a new Constitution, Atlassi noted, adding that the partisan and trade union plurality, as well as the strong character of civil society were long-standing achievements of the Moroccan political system.

Atlassi, also president of the International Committee in support of the Palestinian people, which is part of the Organization of Solidarity with the People of Africa and Asia (OSPAA), underscored the unwavering support of Morocco, King and people, for Palestine and its sacred cause, particularly through the Bayt Mal Al-Quds Acharif Agency.

Reacting to the U.S. Middle East Peace Plan, Atlassi noted that this initiative has been rejected by the Palestinians and the Arab League because it does not take into consideration the legitimate claims and rights of the Palestinian people to an independent State on the 1967 borders, with Al-Quds East as its capital.

State of Health Emergency: Launch on Monday of Exceptional Operation to Establish Identity Cards for Expatriates