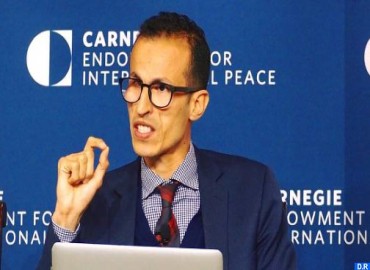 President of the African Institute for Peacebuilding and Conflict Transformation, Dr. Mohammed Ahmed Gain, has highlighted Algeria’s flagrant, imprescriptible responsibility in the regional dispute over the Moroccan Sahara in the analysis he developed in the Sahara Debate, a citizen-run show broadcast on social media.

The university professor underlined that Algeria, in its pursuit of regional hegemony, created “polisario” and continues to provide it with political, military, and financial support, in addition to mobilizing its entire diplomatic machinery in support of the separatist theses. Today, Algeria is isolated at the international level in its support to “polisario” and its worn-out theses, he pointed out.

He underlined that by continuing to defend at all costs the worn-out, fanciful option of the referendum, Algeria not only is responsible for the persistence of this regional dispute, but also contributes to regional instability. Mr. Gain recalled that the Security Council and the entire international community have ruled out the referendum option since 2001, calling instead the parties to make progress towards achieving a realistic, practicable, and enduring political solution that is based on compromise.

According to the researcher, Algeria conceals its geopolitical plans under a flawed understanding of the self-determination principle. He recalled that self-determination has never been construed as equivalent to referenda by the United Nations.

He thus contrasted the Moroccan Autonomy Initiative, which meets the self-determination principle, and its promises of reconciliation, security, development, and good governance, with the destructive option of the referendum advocated by Algeria and “polisario”, which not only is unrealistic, but also sows division and instability in the region.

Mr. Gain also questioned the real motives of the Algerian regime, which portrays itself as the “defender of the rights of peoples” in this regional dispute, while the Algerians’ mobilization for democracy and social justice started a year ago shows no sign of abating.

The university professor also questioned the credibility of the claims of “polisario” to representativeness, while this “group violates the rights of the Sahrawis, loots humanitarian aid, uses indecent tools to perpetuate their capture of the Tindouf camps, and allows no room for criticism or reconsideration of what has been done by polisario”.

As a sign of the vacuity of the claims of the “polisario” to representativeness, the EU Court of Justice has rejected the action mounted by this armed group against the renewal of the Morocco-EU Fisheries and Agricultural Agreements on grounds of “lack of standing.”

Mr. Gain’s affirmed that the only legitimate representatives of Sahrawi population living in the Moroccan Sahara are their Sahrawi-elected representatives, who enable the populations to participate to the elaboration and the implementation of ambitious, innovative and participatory development policies in the framework of the New Development Model for the Southern Provinces launched by His Majesty the King in 2015.

Mr. Gain underlined that the populations of the Tindouf camps perceive lucidly the real dynamics of the regional dispute, as demonstrated by the wave of protests that is currently agitating the camps.

Fully aware of the mercenary character of « polisario », the Tindouf camps populations actively challenge the claim to representativeness of this armed group that is subservient to the plans of the Algerian military, as shown by the recent creation of movements and initiatives explicitly directed against this militia.

In their quest for freedom, the populations of the Tindouf camps find themselves confronted to the ferocious repression of “polisario”. In this zone of lawlessness, of which entrances and exits are locked by the Algerian military and “polisario”, populations are constantly threatened by “arbitrary detention, enforced disappearance, torture, and extrajudicial killings” with Algeria’s active complicity.

According to the researcher, this situation is made possible by Algera’s devolution of authority over the camps to “polisario”, in violation of international humanitarian law, especially the Convention on the Status of Refugees of 1951, which provides that the host state holds an obligation to protect the populations on its territory.

It is noteworthy that, in absence of any reservation on the territorial application clause of this Convention, Algeria is prohibited from transferring sovereignty to a non-state actor, even less so a military one, on its territory.

Mr. Gain recalled that the UN Human Rights Committee has expressed in its Concluding Observations it has adopted at its 123rd session regarding Algeria’s fourth periodic report on the implementation of the International Covenant on Civil and Political Rights “its concerns over the de facto devolution of authority to ‘polisario’, especially jurisdictional authority.”

Mr. Mohammed Ahmed Gain developed this analysis as part of his participation to the Sahara Debate, a citizen-run show designed as an open, democratic platform for serene, dispassionate analysis on the issue of the Moroccan Sahara