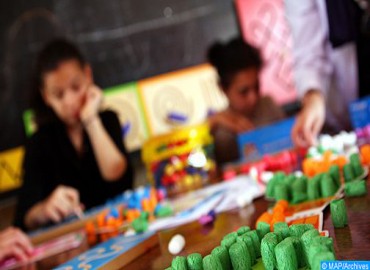 The National Initiative for Human Development (INDH) stressed that National Child Day is an opportunity to renew its commitment to promoting the situation of this category and consolidating its status and rights within society.

In a press release, the INDH said that it places the child at the heart of its concerns, under the third phase (2019-2023), through a set of interventions within the framework in particular of the support programs for people in a precarious situation, and the Next Generations Human Capital Impetus program.

The first program sets the objective of improving the quality of services provided in reception centers, in particular those in favor of abandoned children, whether they are street children or disabled ones, while working to integrate them into their socio-economic environment, the statement said.

The year 2019 was marked by the launch of 88 projects and activities for a global budget of 95 million dirhams, with a contribution from the INDH of 59 million dirhams for the benefit of some 2,600 children from the above-mentioned categories, in addition to the Initiative’s support for the management of 50 reception centers for children in precarious situations, said the press release.

The Next Generations Human Capital Impetus program aims to improve nutrition and the health of mothers and children, generalize pre-school education in rural and remote areas, and encourage academic success and the fight against the main causes of school dropout.

The INDH also emphasized that the interventions touch on several broad lines. With regard to “mother and child health and nutrition”, a tripartite agreement was concluded in 2019 between the INDH, the Ministry of Health and Unicef ​​laying the foundations for a community Health system.

That same year was marked by the organization of a campaign raising awareness about the importance of early childhood, the purchase of medical equipment for 596 health centers in 14 provinces in three regions of the Kingdom, the construction and the development of 44 maternity wards, and the acquisition of 107 ambulances, added the same source.

With regard to the generalization of pre-school education in rural and remote regions, the year 2019 witnessed the creation of 1,263 pre-school units benefiting 30,278 children, supervised by 1,578 teachers in the framework of a partnership with the Ministry of National Education, said the INDH, adding that the objective was to generalize pre-school education in these regions with the aim of building 10,000 new units and the redevelopment of 5,000 others by 2019-2023.

In terms of support for schooling and the encouragement of excellence in 2019, 126 student houses were built or refurbished for 8,300 students, while 400 buses have been acquired for the benefit of 21,700 students, the statement underlined, noting that 4.5 million pupils benefited from the Royal Initiative “One million school bags”.