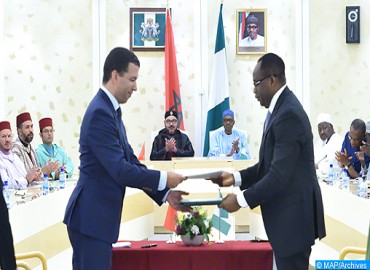 The Nigerian government has expressed its sincere thanks to HM King Mohammed VI for the emergency humanitarian aid, dispatched upon high instructions of the Sovereign to sub-Saharans expelled to Niger.

In statements to MAP following the ceremony held upon the arrival of the first batch of this aid consisting of 35 tons of tents and food, several ministers stressed the importance of this aid for the populations, especially during this cold period in the country.

“On behalf of Niger’s President and Government Head, we thank HM King Mohammed VI for this important donation,” said the minister in charge of relations with the institutions and head of the Agadez region, Issouf Barkai.

For his part, the Delegate minister to the Minister of Agriculture and Livestock, Mohamed Boucha, hailed this “highly humanitarian gesture in favor of the Nigerian people, especially the populations of the Agadez region”, highlighting the role of the Kingdom at the continental level in strengthening South-South cooperation.

This first batch of humanitarian aid was handed over to Nigerian authorities by Morocco’s ambassador in Niamey, Allal El Aqab, in the presence of several Nigerien senior officials.

A second batch of humanitarian aid, which includes 15 tons of tents, 16 tons of basic foodstuff and 4 tons of blankets, will arrive in Agadez in the next few hours aboard three Royal Air Forces aircrafts.

In conformity with the instructions of HM King Mohammed VI and following the migration and humanitarian crisis due to the massive expulsion of Sub-Saharans to Niger, Morocco sent an emergency aid to those expelled who are in a situation of extreme precariousness at a center located in the north of Niger.

The aid is provided by the Mohammed V Foundation for Solidarity, the Moroccan Agency for International Cooperation (AMCI) and the Interior Ministry.

The aid is part of Morocco’s active solidarity with the countries and peoples of the continent.

It also aims to help the brotherly country of Niger to face an exceptional situation that could have dramatic implications.

Morocco will provide a total of 116 tons of aid.

Senegalese President: Morocco’s Return to AU, Something ‘Natural and Normal’