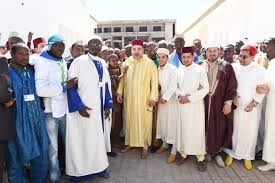 Stockholm – The Swedish public television SVT highlighted the Moroccan experience in training imams and the efforts of the Kingdom to fight against extremism in the region.

Through the training of imams, Morocco intends to ensure vaccination against terrorism, SVT said in a report recently published on the Institute Mohammed VI of training of Imams, morchidines and morchidates in Rabat.

Incidentally, the Swedish channel stressed that this property aims to provide new generations of imams values ​​of “the middle Islam” to counter the scourge of extremism and radicalism.

“This view of Islam, the antithesis of violence and terrorism, is the original doctrine,” said to the channel Abdeslam Lazaar, director of the Institute Mohammed VI training of Imams, morchidines and morchidates, adding that it is important to train imams to spread “the authentic values ​​of Islam.”

SVT noted, moreover, that this institution also trains more than 200 imams from Mali, Libya, Tunisia and Nigeria, is part of “a significant investment in the prevention of religious extremism “granted by Morocco.

In addition to training and awareness, the Moroccan approach is based on an arsenal of anti-terrorist laws and on improved social and economic conditions of the most vulnerable groups, said the same source.

“Training imams in Morocco and abroad is a way to share and promote common values,” noted in this regard the Minister with the Minister of Foreign Affairs and Cooperation, Mrs Mbarka Bouaida, quoted by the channel .

The Kingdom shares these values ​​with other countries, mainly in the Sahel “hence the importance to also share our vision with those who live in this region,” added the minister.

“We are present in Mali and organize training sessions in Niger and Chad and other countries in the region, and even in France, she recalled.