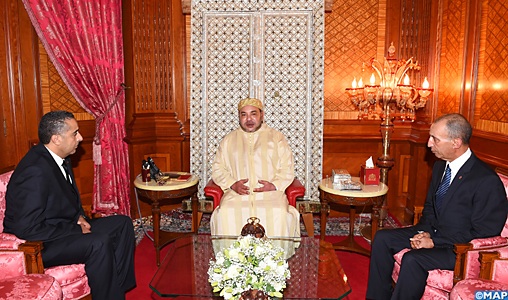 Rabat – Mr. Abdellatif Hammouchi appointed by HM King Mohammed VI, general director of National Security, was installed on Friday in his new role, at a ceremony chaired by the Minister of Interior, Mohamed Assad.

Mr. Hammouchi was appointed Friday by King to the post of Director General of National Security, while retaining his post as head of the General Directorate of Territorial Surveillance (DGST).

Speaking at the inauguration ceremony, Mr. Assad congratulated the new Director General of National Security for the confidence placed in him by the Sovereign, wishing him success in his new mission.

Abdellatif Hammouchi has integrated in 1991 in DGST where he held several senior positions before his appointment by King Mohammed VI in 2005 at the head of this department, where he has shown total dedication and great ability, said Mr Assad, adding that the new appointment will certainly give a new impetus to the action of the General Directorate of National Security (DGSN), since it will promote the development and the modernization of the Directorate tools.

It will also allow perfect coordination between DGST and DGNS and improving the effectiveness of their actions, said the minister, who has highlighted the role played by women and men of the DGNS in an area that touches the daily life of citizens, to the extent that the preservation of security and public order and protection of life and property.

The achievements of Morocco in terms of social peace, security and protection of people and property as well as in the fight against extremism and terrorism, must be consolidated, while ensuring a perfect balance between the consecration of individual and collective freedoms, respect for human rights, strict implementation of the law, the dignity of citizens and improving their economic and social condition, he noted.

In application of the High Royal Directives, the government will continue its efforts to support the security sector with the necessary means guaranteeing modern work tools, improving management methods, coordination and cooperation and paying particular interest to the human element through the continuous development of training methods.

As with other security services, the DGNS contributes effectively to economic and social development of the Kingdom, fostering a climate conducive to the exercise of constitutional rights and freedoms and ensuring the stability of citizens, said M . Assad, who thanked Mr Bouchaib Rmail, the outgoing Director General, for “the efforts he has made throughout his career as head of DGNS”.

He called all part of the DGNS to continue their work, tireless and serious, with Mr. Hammouchi in order to continue efforts to maintain peace and tranquility in order to put the Moroccan security system up to the aspirations of His Majesty the King in terms of efficiency in the service of the general interest.