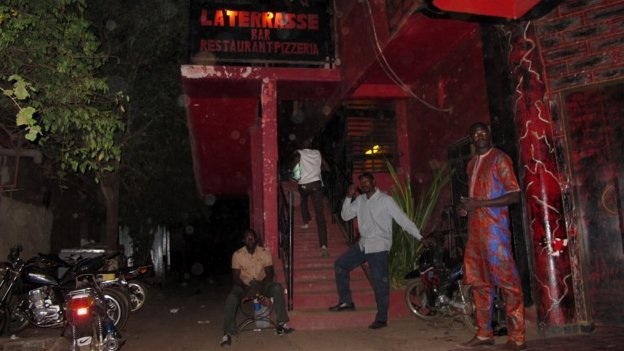 Deadly attack against a restaurant in Bamako

Bamako -The Malians woke up Saturday in shock after the deadly attack against a restaurant in the heart of the capital Bamako. The attack was perpetrated by at least one gunman who opened fire in the bar and restaurant ‘La Terrasse’ ‘, according to police. Provided a provisional assessment reported five people, including two Europeans and three Malians, and a dozen injured.

In a statement, the head of the UN Mission in Mali (Minusma) Mongi Hamdi, condemned the “heinous and cowardly attack,” saying in a statement that among the wounded were “two international experts working with the Service UN fight against mines (UNMAS) of the Minusma “without giving them citizenship.

Immediately after the attack, two suspects were arrested and interrogated, according to Malian police sources .

These two suspects, neither the identity nor nationality were not specified “are being interrogated,” said one of the sources, adding that they had begun to provide investigators with “interesting”information . Observers consider it very likely the trail of a terrorist attack. According to a statement from the MINUSMA, ‘this attack was carried out by at least one masked person opened fire on customers’. According to witnesses quoted by the media, a little after midnight, a hooded man started throwing grenades in the streets of the Princess in a lively and popular expatriate area, military and humanitarian.

He then entered a bar and restaurant, La Terrasse, where he made fire and strafed the crowd. He then left the establishment, and joined an accomplice, who was waiting in a car, says one. According to the Malian newspaper “Le Combat,” a man and a woman opened fire with large caliber weapons while a third assailant stood guard at the entrance of the restaurant.

This attack sparked several reactions of outrage across the world. In 2012, northern Mali fell under the control of jihadist groups that have been largely driven by international intervention, launched in January 2013 at the initiative of France. Mezouar: Morocco remains with Libya to overcome this phase