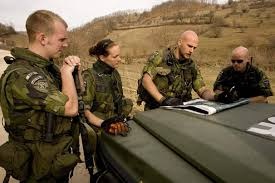 The Swedish troops began their deployment in Mali Friday as part of integrated multidimensional United Nations Mission for Stabilization in Mali (MINUSMA), reports the Swedish television channel SVT.
This is the first time in ten years that Sweden sends troops as part of a UN mission. The last time was in Liberia in 2004. Swedish troops are mandated to protect civilians in the city of Timbuktu.
During the past 18 months, 33 UN soldiers were killed in Mali. Swedish soldiers will be stationed in an area where attacks against UN forces have increased in recent times, indicates SVT.

Radical jihadists took power in northern Mali in early 2012, before being driven out by French troops. While the jihadists have been weakened by the intervention of French forces and their African allies, they remain active and carry out deadly attacks. Comoros Minister of Foreign Affairs: Kingdom’s Territorial Integrity is Out of…

The Kingdom of Eswatini Opens Consulate General in Laayoune