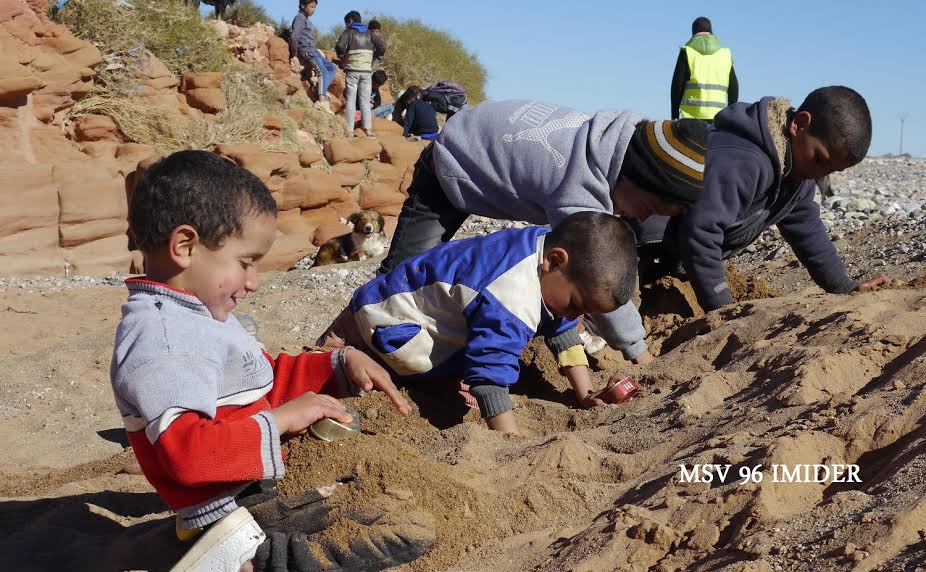 December 21, 2014 the students’ peaceful protest march of elementary, middle and high school has walked in an orderly manner on the national road no. 10, chanting slogans and carrying banners in solidarity with their parents in permanent sit-in for more than three years on #Albban Mount. The students march was in continuity with the protest’s actions for the recognition of human and civil rights of the Imider population, against the repressive measures by the Makhzen, the marginalization, the low quality of the school and educational system, the lack of basis infrastructure, for the right to study.

The students march has then met with adults groups beside the road n. 10, who were waiting for the boys and girls to prepare and enjoy together the tea and the lunch and playing at the agreed place.

The protesters then gathered in the General Assembly Agraw to discuss democratically, to evaluate and agree on the next steps, the forms of struggle, the news and developments.
During the Agraw many intervened to talk about: women, men, old and young people, students, reaffirming the need to “withstand any challenges, both those imposed by the harsh environmental conditions of the permanent sit-in on Albban Mount both those imposed by the Makhzen and the mining company with their policy of repression against the activists of the Movement.

At the end of Agraw there was a visit to a family who has just suffered a mourning, to express the condolences of the community following the principle of solidarity, brotherhood and unity of the Imider people.

The 11th edition of the Extreme Marathon next Sunday in Zagora