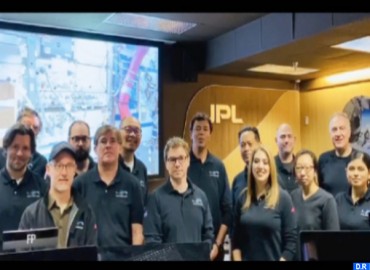 Washington – A new breakthrough in quantum physics led by Moroccan scientist Kamal Oudrhiri, who has worked for NASA for some 20 years and played a key role in multiple space missions. His latest mission at the head of a prestigious multi-disciplinary team including three Nobel laureates opens new horizons for the study of quantum phenomena and their technological applications.

Tell us about the breakthrough you just accomplished using the Cold Atom Lab Atom Interferometer onboard the ISS? What does it mean to have an atom appear in two places at the same time? Is this the beginning of the teleporting age?

Technically what we’ve done is exploit the wave nature of matter to split an atomic wave packet (representation of an atom in quantum mechanics) so that it is in a superposition of being in two separate places at once. If we were actually making a measurement while the atoms are split, we would find the atom in one position or the other with a 50% probability. After splitting the atomic wave packet, the CAL atom interferometer uses laser pulses to force them to recombine again. Much like the constructive and destructive interference that occurs when ocean or sound waves collide, the spatial pattern of atoms recorded on a camera after each atom interferes with itself provides a sensitive quantum measurement of such environmental factors as gravity, spacecraft accelerations, rotations, etc. In contrast to teleportation, a quantum technology where the full state matter is transported to a distant location without moving the matter itself, atom interferometers capitalize on the ability of atoms to act as high-frequency waves and also for a single atom to be in many places simultaneously (delocalized) for high-precision measurement.

Atom interferometers have been demonstrated in numerous labs around the globe, but this is the first demonstration of one in space. I believe that this result is one small step towards a future space age of quantum technology.

What are the major challenges of the breakthrough and its impact on the future of quantum technologies?

Learning to carefully control and optimally position a sample of atoms was critical for this breakthrough. These types of (quantum gas) experiments are considered to be among the most complex table-top experiments in the world. Even now, only a handful of research institutions are developing transportable atom interferometer systems for terrestrial sensing applications. The CAL Atom Interferometer is not-only transportable, but was designed to survive launch in space and to be fully remotely operated with minimal astronaut intervention. These are no small feats for demonstrating this unique quantum sensor for the first time in space.

As to the impact on future technologies, atom interferometers are expected to be the basis for a new generation of quantum sensors capable of making exquisitely sensitive measurements of gravity, accelerations, rotations, magnetic fields, etc. Such sensors could answer important questions in physics such as the nature of quantum gravity, dark matter, and dark energy; aid in the search of gravitational waves, as well as more practical applications such as spacecraft navigation and prospecting for subsurface minerals on other planets.

The breakthrough was carried out in part during confinement. Please describe the work conditions and how you conducted an experiment that required a great deal of precision and it also involved several teams?

CAL is a particularly an interactive laboratory, as it’s performing experimental science (as opposed to the observational science more common in planetary exploration). For the first (20 month) science phase of CAL, the instrument was commanded out of the Earth Orbiting Mission Operations Center (EOMOC), with Mission Operations Specialists and science team members working in close proximity to keep the experiments running. All of that changed in March, within a week, we went from operating fully on-site at JPL to operating the instrument fully from home to support JPL’s response to the COVID-19 pandemic. To maintain CAL experiments, we require three physicists on line at all times, while additional scientists are reviewing data and designing new experiments. We are also interfacing with a number of Principal Investigator teams at various institutions spread around the globe. So a lot of coordination amongst the teams is required, and we make significant use of many of the tools provided by NASA. We have been delighted to see the high level of productivity achieved on CAL, even with the extra “help” we get from our younger and/or harrier family members. It has been a learning experience and we are very happy that we were able to demonstrate atom interferometry in CAL, even in these trying circumstances.

As a scientist, what are some of the lessons you learned from this confinement?

Although crisis periods are generally difficult times, but they offer us great lessons and allow us to calibrate our vision and our priorities. Among the observations and lessons that can be drawn from the current crisis are:

Unity and support are human values that have been emphasized during this period of confinement. All over Morocco and around the world, people are showing great social solidarity.

When we think about connectivity between nations, it’s mostly in terms of economics or technology. The current pandemic shows us that we are much more connected as evidenced by the rapid spread of the virus worldwide.

This pandemic reminds us that health – not money – is our real wealth, and the well-being of our family and loved ones is the most precious thing in the world.

All our actions and intervention measures to the COVID-19 crisis must be based on science.