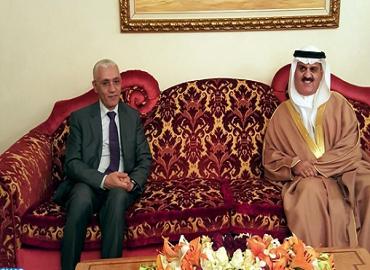 Al-Mulla praised in a statement to MAP the brotherly and historic relations between Morocco and Bahrain, which have witnessed constant evolution thanks to the High guidance of HM King Hamad Ben Issa Al Khalifa and his brother HM King Mohammed VI.

He highlighted the convergence of the two country’s views regarding regional and international issues of mutual interest, hailing Morocco’s positions with regard to Bahrain’s sovereignty and security, Arab causes, and peace and security in the world.

For his part, Alami, who started on Sunday a working visit to Bahrain, said that this visit is a part of the good relationships between the two kingdoms, which have gained momentum in line with the High guidance of the two Sovereigns.

Alami, who is leading a high-level legislative delegation to Bahrain, is expected to hold talks with numerous Bahraini officials and discuss means to strengthen bilateral legislative cooperation.

Alami noted that talks with Bahraini officials will focus on means to consolidate bilateral cooperation with the aim to strengthen “pioneering reforms” initiated by both countries in different fields, and share with Bahrain Morocco’s experience in the field of parliamentary legislation and administration in addition to counterterrorism.