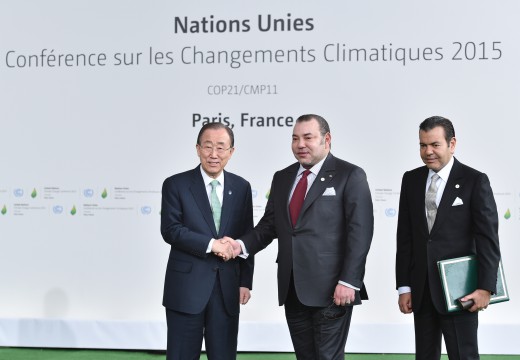 In a speech delivered on his behalf at the 21st Conference of Parties to the UN Framework Convention on Climate Change (COP21) in Paris on Monday, King Mohammed VI exhorted world leaders to take bold action on climate change goals, while giving “special attention” to Africa’s sustainable development needs.

“The climate change predicament is the ultimate injustice suffered by the most vulnerable,” read the speech. “The consequences of climate change are affecting developing nations as much as — if not more than — developed countries, especially the least advanced African and Latin American States and small island States.”

“Is it fair to advocate frugality when one already has everything?” the King continued. “But when one has little, is it a crime against the planet to want more? Does it make sense to describe a type of development as ‘sustainable’ when it leaves the majority of people living in poverty? Is it appropriate that prescriptions for climate protection be dictated by those who bear the greatest responsibility for global warming?”

“… We must build patiently and resolutely on what is possible and attainable,” he said. “It is only through effective action and tangible results that we can overcome reluctance and resistance.”

The King noted Morocco’s own “proactive policy on sustainable development and environmental protection” as examples of what can be done to successfully curb climate change, citing the country’s development of dams and watersheds, as well as “the Environment Charter, the Green Morocco Plan, the Green Investment Plan, the ban on GMOs and the new law on plastic waste” which “clearly reflect our commitment and our consistent action.” The King also announced that Morocco’s ambitious “objective of securing 42% of the country’s energy mix from renewable sources by 2020 has recently been increased to 52% by 2030.”

Morocco, which is scheduled to host the next COP conference in Marrakesh, is frequently lauded as a leader in renewable energy and climate change policy. The 2015 Climate Performance Index called Morocco “one of the global forerunners in renewable energy policy making” and ranked it number one among developing countries in addressing climate change. Recently, The World Bank has stated that “Morocco is poised to make history” with its Ouarzazate Solar Power Complex which, when operational, will be the world’s largest concentrated solar power plant. Iran losing more troops in Syria, and the entire war