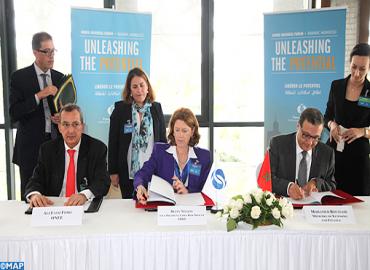 A mission of the International Monetary Fund (IMF), on a visit to Morocco, lauded Wednesday in Rabat, efforts made by national authorities to reinforce public finances.

“The IMF mission commends efforts made by the authorities to reinforce public finances as shows the 2016 draft appropriation bill which seeks to decrease budget deficit to 3.5% of the GDP,” said head of the mission Nicolas Bancker during a press conference.

Blancher, who presented the results of consultations with the Moroccan authorities, under article IV of IMF and the Precautionary and Liquidity Line, described as laudable the noteworthy accomplishments made regarding the reform of the subsidies system as well as the amelioration and modernization of the budget framework.

On the mid-term, budget reforms are expected to continue fostering the economy’s resilience and margins for budget maneuvers in order to invest in infrastructure, health, education and social security, he said.

The cautious macro-economic management and the ongoing structural reforms were very beneficial to Morocco over the past years, he noted.

Economic growth is forecast to stand at 4.7 in 2015 thanks to a good crop year, and the deficit of foreign transactions will continue to drop in 2015 to reach 1.5% of the GDP, he added.