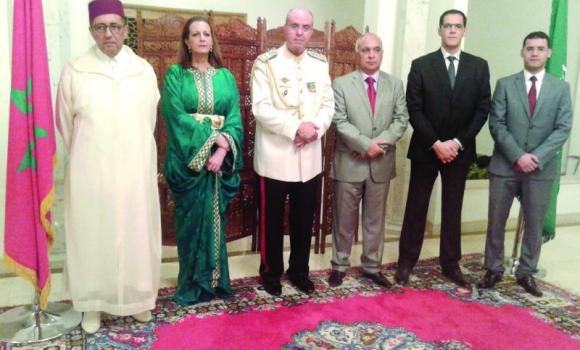 RIYADH: Moroccan Ambassador Abdussalam Baraka has praised “excellent” trade and bilateral relations between his country and Saudi Arabia and expected the ties to grow further.
Speaking on the occasion of Morocco’s National Day on Thursday night, the envoy welcomed and thanked the guests of honor, including Riyadh Gov. Prince Faisal bin Bandar, businessmen and others.

The two countries have stepped up collaboration in various sectors during the short period of time since Baraka’s appointment to Saudi Arabia as ambassador and Permanent Representative of Morocco to the Organization of Islamic Cooperation (OIC) on March 9, 2013.
The first Moroccan-Saudi investment forum, organized by the Saudi-Moroccan Business Council (SMBC), was held along with the Kingdom’s Forum in Casablanca on June 4-6 last year.

The forum was within the framework of the recommendation of the 12th Saudi-Moroccan Joint Commission held in Jeddah in August 2013, according to an SMBC official.
As per the figures available, the total trade volume between the countries is roughly estimated at SR13 billion, with the balance of trade in favor of the Kingdom.
Before his appointment to Saudi Arabia, Baraka had earlier been posted in Spain, Argentina and Uruguay.

Forbes Survey: Morocco is the Arab World’s Most Reputable Country