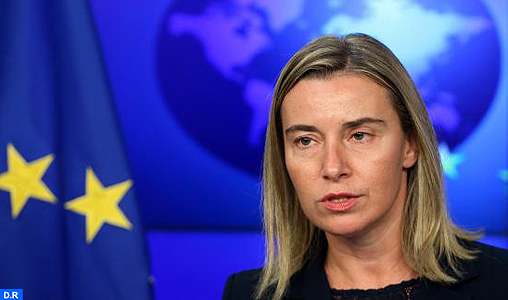 Brussels – The European Union (EU) on Sunday welcomed Morocco’s support to the process dialogue that led to the initialling Saturday night of the Skhirat Agreement to end Libya crisis.

“I want to thank the Special Representative of the Secretary General of the UN for Libya, Bernardino Leon, for his tireless efforts to bring the parties to an agreement, and the Government of Morocco for its support to the UN process of dialogue” stressed the EU’s High Representative for Foreign Affairs and Security Policy, Federica Mogherini.

It held that it is “an important step” towards the restoration of peace and stability in Libya, adding that with the initialling of the political agreement, the House of Representatives, independent and Misrata officials have proven their “determination to find a peaceful solution to the crisis that, for almost a year, divided, impoverished and suffering inflicted on the Libyan people.”

“They took the future of Libya in their hands, responsible and courageous manner,” she said, calling those who have not yet initialed the agreement to display the same spirit of consensus and responsibility in the interest of all the Libyan people.

The head of European diplomacy assured, to this end, that the EU “has consistently and actively supported this process and remains committed to continue doing so in the future.”

“The European Union is ready to support a national unity government, once it is established, so that all Libyans can quickly reap the benefits of this process towards peace and stability,” stressed Ms. Mogherini .

She promised that the EU will immediately contribute to capacity building of national and local authorities with a view to an early resumption of services provided to citizens, if the Libyan authorities demand it, in a spirit of equal partnership.

The agreement Skhirat was initialed by all the protagonists present in Skhirat, including leaders of political parties taking part in the 6th round of inter-Libyan political talks held under the auspices of the Special Representative of the Secretary-General UN Libya and Head of the United Nations Support Mission in Libya (Manul), Bernardino Leon.