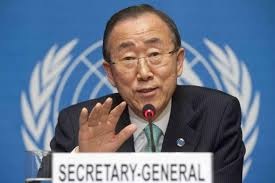 New York – The Secretary General of UN Ban Ki-moon said he was “encouraged” Sunday with the initialling Saturday in Skhirat, of Libya peace agreement, calling for the implementation of its provisions without delay.

“The Secretary-General is encouraged by initialling Skhirat agreement in Morocco, the Libyan political agreement, and looked forward to its conclusion and implementation without delay,” said a statement from the UN.

The initialling of the peace agreement is a “clear manifestation of will and political courage,” Ban estimated, adding that this agreement brings more Libya for a settlement of institutional and current security crisis.

Ban, in this context, urged all Libyans to “advance the political transition process in a spirit of unity, through the formation of a national unity government.”

He also reiterated his support for the Libyan people through his Special Representative for Libya, Bernardino Leon, and support the UN mission in Libya (UNSMIL).

The peace agreement was initialed by all actors present in Skhirat, including leaders of political parties taking part in the 6th round of inter-Libyan political talks held under the auspices of the UN.