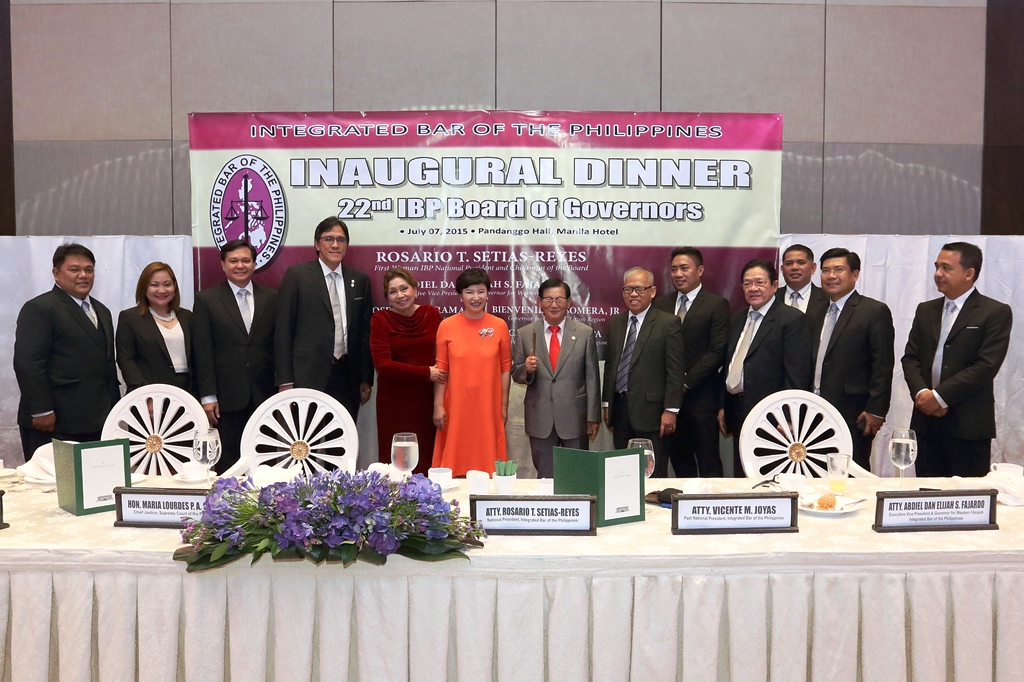 Manila, Philippines- Philippine lawyers have a freshly sworn in the Integrated Bar of the Philippines (IBP). The former Executive Vice President Rosario T. Setias-Reyes was appointed as the National President of IBP, replacing Attny. Vincente M. Joyas who served the organization from 2013, at the inauguration ceremony held at the Dignitaries Lounge at the Supreme Court on July 7th, 2015. Setias-Reyes is the first female National President of the IBP, the official organization of all Philippine lawyers whose names appear in the Roll of Attorneys of the Supreme Court. IBP’s national board members for 2015-2017 were sworn in before the SC Clerk of Court.

At the occasion, a group of selected guests were also invited to witness the scene. A Peace Advocate and Chairman of Heavenly Culture, World Peace, Restoration of Light (“HWPL”), Mr. Man Hee Lee attended the ceremony and the dinner held afterwards to give a congratulatory message upon the special invitation from IBP along with Chairwoman Nam Hee Kim of International Women’s Peace Group (“IWPG”).

Chairman Lee, as known his achievement is especially noteworthy in the nation, played a decisive role in ending a 40-year conflict of Mindanao between Catholic and Muslim communities. At the inaugural dinner, Chairman Lee spoke about the significance of the enactment of an international law for the cessation of war and role of judicial officers and urged the national board members of IBP and all judicial leaders to realize the necessity of amending the international law to terminate all wars. He stated that the road blocks in achieving enduring peace within this world is because there is a lack of an international constitutional law to ban wars and war crimes.

Seeing this matter, Chairman Lee has appealed to world leaders to demonstrate their commitment to peace by signing the enactment of war into international law. “If each nation’s head and leaders desire for world peace and truly love their people, they should work for this amendment and sign on the agreement of the enactment of an international law to cease wars. For the future of justice in the Philippines, all the honorable officers who are here with me today have to urge the nations to participate in establishing a law that prohibits the further producing and developing of weapons. In case if any states violate the law and continues to carry out any non-peaceful activities, a form of penalty and punishment should be applied under an international law,” said Chairman Lee. Chairwoman Kim also called on the officers present especially woman leaders to actively work for peace by saying “Numerous international agreements and principles for peace have been drawn up and ratified until today. However, war and civil unrest have not stopped in this world. The only way to define the right framework for the nations to bring forth peace is Chairman Lee’s initiative on the enactment of an international law for peace. We, the women, have the responsibility to protect our husbands, children, and our neighbors.”

President Setias-Reyes acknowledged the tremendous efforts of two Chairpersons for the last several years, visiting nations and promoting the need of the implementation of the law for peace. As she became the new President, Setias-Reyes agreed to serve as the member of HWPL’s Peace Advisory Council to work for and bring forth such enactment. In the mean time, in his latest visit in the Philippines in late May this year, Mr. Lee has already met the former President Attny. Joyas with a few prominent political and judicial leaders through a private meeting arranged in Manila. Attny. Joyas, who has served as the member of HWPL’s Peace Advisory Council since then, again expressed his support in assisting Mr. Lee’s proposal on the enactment of an international constitution to permanently end wars and conflicts and will further collaborate with international lawmakers to implement the proposal.

The value of precious lives and resources destroyed in war are a result of decisions made by individuals and these individuals make justifications for their actions to continue to practice war crimes in many parts of the world. As the IBP officers have agreed and pledged to protect citizens and villages of the Philippines through advising and supporting HWPL in the amendment process, it is realized that peace has come one step closer.