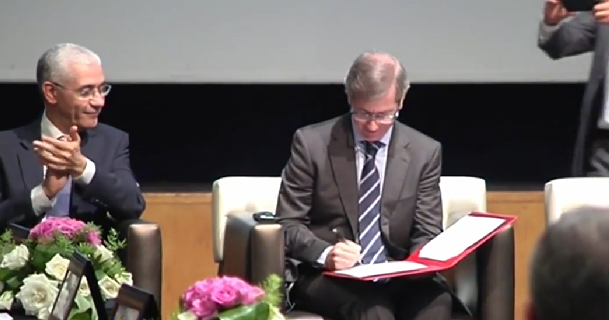 Skhirat – The conflicted Libyan parties present in the negotiations taking place in Skhirat, near Rabat, initialed on Saturday night, the Skhirat agreement to make Libya end the political crisis There has been raging for more than three years.

The Skhirat agreement was initialed by all the protagonists present in Skhirat, including leaders of political parties taking part in the 6th round of inter-Libyan political talks held under the auspices of the Special Representative of the Secretary-General UN Libya and Head of the United Nations Support Mission in Libya (Manul), Bernardino Leon.

The Skhirat agreement’s signing ceremony was attended by Minister of Foreign Affairs and Cooperation, Salaheddine Mezouar, and the Presidents of the Chambers of Representatives and councilors, Rachid Talbi Alami and Mohamed Cheikh Biadillah respectively.

Also attending the ceremony several foreign ambassadors as observers in the absence of representatives of the General National Congress (NMC) Parliament Tripoli.