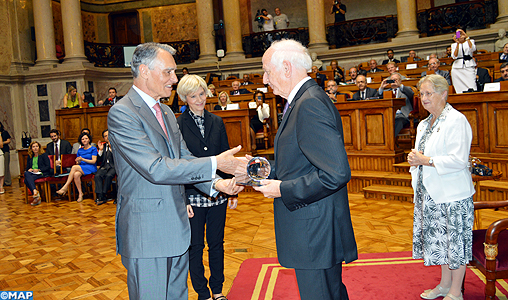 Lisbon – Mr. André Azoulay, Advisor of Morocco King, received Wednesday in Lisbon, the 2014 North-South Prize of the Council of Europe from the President of the Republic of Portugal, Anibal Cavaco Silva.

The North-South Prize 2014 was awarded to Mr. Azoulay for his contribution to the peace process in the Middle East, including the promotion of reconciliation between Jews and Muslims as well as for his role in the service of promoting intercultural dialogue in Mediterranean region.

At a ceremony held at the Assembly of the Republic, in the presence of Secretary General of the Council of Europe, Thorbjorn Jagland, the President of the Portuguese Parliament Assunção Esteves, and an audience of personalities from politics , academic, cultural and diplomatic, the North-South Prize was also awarded to Dr. Maura Lynch (Ireland) in recognition of his dedication and determination to promote human rights, particularly for the restoration of the dignity of disadvantaged.

The Secretary General of the Council of Europe Mr Jagland praised the leadership of HM King Mohammed VI pioneer whose authority has given its full meaning and fullness to its full governance based on continuing reform and the peaceful and consensual evolution of the Moroccan society.

Also took part in the ceremony, the Chairman of the Executive Committee of the North-South Centre, Jean-Marie Heydt, the Portuguese Foreign Minister, Rui Machete and the Ambassador of Morocco in Lisbon, Karima Benyaich, and several other prominent personalities.

This prize is awarded annually since 1995 to two individuals who have distinguished themselves by their dedication, commitment and action to promote human rights and democratic pluralism, as well as their role in strengthening the solidarity North -South.

Simultaneously with his distinguished career in economics, André Azoulay is dedicated to promoting dialogue between cultures, people, women and men of the Mediterranean. He was President of the Anna Lindh Euro-Mediterranean Foundation for the Dialogue between Cultures 2008 to 2014.

Moreover, it is since 2005 member of the High Level Group of the Alliance of Civilizations UN. He also chairs the Executive Committee of the Foundation Three Cultures and Three Religions, based in Seville, Spain and is a founding member of the Aladdin Group for promoting mutual understanding and intercultural relations between the Islamic community and the rest of the world.

The North-South Centre of the Council of Europe, based in Lisbon since 1990, aims at the promotion of education for global citizenship, sitting on the principles of respect for human rights and the responsibility of citizens through dialogue between Europe, the southern Mediterranean and Africa.