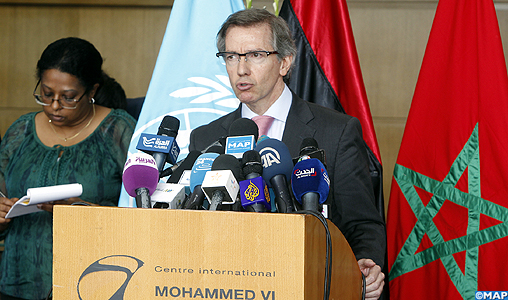 Skhirat – The Libyan conflict parties, gathered since Monday night in Skhirat in the 5th round of political talks, have responded “positively” to the latest proposal of comprehensive political agreement presented by UN to solve Libya crisis, said the Special Representative of the UN Secretary General for Libya, the Spaniard Bernardino Leon.

The document was given to the negotiators during the opening session of the new round of talks which took place in the presence of the President of the House of Representatives, Rachid Talbi Alami, and the Minister for Foreign Affairs and cooperation Mbarka Bouaida.

“We are facing the possibility of a triple consensus in Libyan society, participants in dialogue and international consensus,” noted Mr. Leon at presser shortly before leaving conference to Berlin for a meeting of the conflict parties with the foreign ministers of the permanent country of the UN Security Council.

“Obviously I have to say it carefully because it is a first reaction, has not yet discussed in detail with all participants, so I can say that there is optimism and many hope, “said the UN official, who reported a” significant “international support for this agreement to go forward for a final solution.

Mr. Leon said he will continue to meet with the parties about the security arrangements, noting that the Berlin meeting is “very important” for the negotiation process.

The Libyan political discussions aimed at finding a political solution to the crisis in Libya resumed Monday night in Skhirat, near Rabat, under the auspices of the mission of United Nations support in Libya (Manul).

Negotiators will have to go late Tuesday afternoon in Berlin for a meeting with the foreign ministers of the permanent country of the UN Security Council before returning Thursday Skhirat to continue their discussions.

Skhirat had hosted four rounds of political talks between the Libyan parties to find a political solution to the conflict.

Among the main items on the agenda of the talks include in particular the establishment of a cease-fire, the restoration of security, disarmament of armed groups and the formation of a national unity government, that will preserve the sovereignty and territorial integrity of Libya. We live with opened eyes