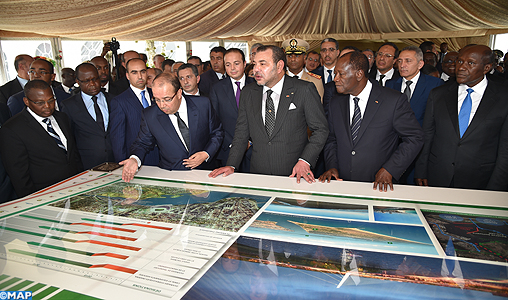 Abidjan- The project Cocody backup and recovery of the Bay of Cocody concerns the ecological and hydro-sedimentary lagoon Ebrié in general and the Bay in particular, reflecting the existing exemplary partnership between Morocco and the Ivory Coast.

This structuring large-scale project, the presentation ceremony was chaired Wednesday in Abidjan, by HM King Mohammed VI and President of the Republic of Ivory Coast, Alassane Ouattara, regarding the Guru and basin Bay of Cocody that are highly symbolic and sensitive areas of Abidjan, in that they reflect, in their current state, the great environmental fragility of the lagoon and its Ebrié continental perimeter.

It is in this register that the project takes place, including the Agency for the development of the site of the Lagoon Marchica is responsible for implementing.

It aims to restore the lagoon Ebrié his blue through both the rehabilitation of deteriorated liquid sanitation works that integrated landscaping and reconstruction of the plant cover Guru paddling against erosion by incorporating leisure areas.

The special interest that HM King Mohammed VI door to this project does not date since little Moroccan commission had conducted on the High Royal Instructions, a mission in Abidjan (20-24 March 2014) followed by a technical mission ( 8-11 April 2014) of experts, the Marchica Agency, specialized in environment, maritime works and hydraulics.

Missions that were followed by discussions with the Ivorian government agencies in charge of implementing the priority program for cleaning up the Guru Basin and the Bay of Cocody.

The implementation of technical solutions to priority problems, must be accompanied by a coherent and integrated approach to the conservation and sustainable exploitation of the bay carried by an ad hoc body.

To do this, an integrated project will be implemented for the preservation and enhancement of the Bay of Cocody.

This ambitious project is built around five thematic plans, namely the Blue Plan, covering aspects of hydraulic and hydro-sedimentary Gris Plan, relating to liquid and solid sanitation requirements, and the Green Plan, aimed a landscape reconstitution.

This integrated project also includes the Ochre Plan, proposing an approach for the improvement of transport and urban mobility and the Red Plan defining priority actions whose implementation is proposed in the short term.

In detail, the Blue Plan is heavily guidance for solutions for efficient water management of the Guru and his outfall basin, protecting the environment and mitigating the risk of flooding.

It grants the same importance to the realization of a drainage channel to ensure the return of water drained by the Guru to the bay. Which channel will be settling basin office designed to trap sediment and facilitate maintenance dredging.

The Plan also covers the release of easements channel with revegetation of the surrounding and the creation of an ecological belt along the canal to prevent the occupation of houses by banks, ensuring regular maintenance of dams clippers and retention basins (cleaning, screening, removal of floating debris, unclogging bottom outlets) so that they fully perform their function.

The Plan aims Gray, meanwhile, to fight against the visible pollution in the Bay of Cocody by discharges of wastewater and the degradation of living conditions of the population.

In order to remedy this alarming situation, which currently suffers the Guru basin and its natural outlet in the Bay of Cocody, the proposed actions come in the wastewater, particularly through the establishment of a strategy liquid sanitation across the Grand Abidjan and implementation of a compact treatment plant dedicated to Guru Basin over an area of about 5 hectares.
Pending the implementation of a comprehensive solution, the pilot station would provide minimal treatment before discharge into the bay, in addition to staffing Abidjan of a sanitation master plan enabling prevent any discharge of raw sewage into the lagoon Ebrié, given the nature of the medium almost closed.

As for the Green Plan, it intervenes to counter particular to the loss of plant and animal species associated with the original ecosystem, to the intense siltation accelerated deforestation in the Bay of Cocody and urbanization basin Guru.

To fight against erosion and reduce siltation and flooding downstream, it is necessary to restore plant cover adapted. This operation is to be part of a comprehensive framework of landscaped green belt kind development that will go up in a ringfenced space and protected from urbanization.

After silting and pollution of the Bay of Cocody, the latter will be the culmination of the green corridor.

While its West Bank will be an alignment tree planting operation along roadworks and banks, the bank will, in turn, converted into urban park with a landscape tree species ensuring continuity between the Bay of Cocody and the Banco forest.

The Ochre Plan is oriented transport and mobility, Abidjan suffering from saturation of its road network. This situation is accentuated by the presence of the lagoon Ebrié which divides the city into two zones (North and South) connected by two bridges (Felix Houphouet Boigny and Charles de Gaulle).

Regarding the guidelines for the implementation of this plan, the redevelopment of the intersection Indénié, as part of a comprehensive and integrated vision is needed, the crossroads at the center of all the problems affecting the Bay and its watershed.

For effective management of mobility in Greater Abidjan, it is recommended to provide the city of the Urban Travel Plan (PDU) and a Transport Scheme Manager in Common (SDTC).

The PDU will define, in line with the urban development of the town, an organizational strategy for urban mobility to develop and optimize the various modes of existing movements, and define complementarities and linkages between these modes (pedestrians Two wheels, transportation, taxis, passenger car and transportation lagoon).

The PDU will allow the establishment of a transport supply compatible with sustainable development issues, including through a reduction in car traffic and improving the functioning of the territory in terms of transport by promoting alternative modes while ensuring a quality living environment and balanced development of the territory.

As for the Red Plan, covering priority actions related to hydraulic structures through design review and technical requirements for dams or the realization of emergency ditching the three retention basins (Fraternité Matin, Lycée Technique and CIE ).

This plan concerns including liquid waste by identifying all the points of discharge in the Bay of Cocody and the Guru basin ranking them in order of importance, as well as solid waste by cleaning and cleaning the banks of the urbanized area of the lagoon Ebrié.

Regarding transport infrastructure and urbanization, the Red Plan recommends, among other things, consideration of the possibility of integrating the enlargement of the lagoon Boulevard project, the construction of a road and parking areas serving the western shore of the bay and the prohibition of massive urbanization project at the outlet of Guru Basin and in the currently visible part of the Bay of Cocody.