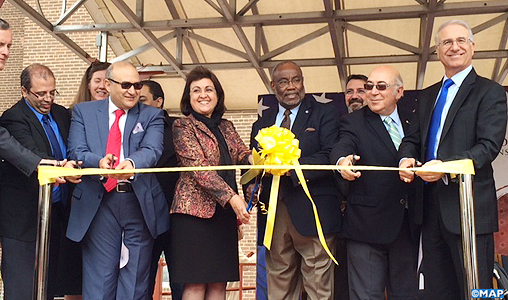 Inauguration of the Crafts exhibition in Alexandria “Moroccan Days”

Alexandria- The exhibition “Moroccan Days” was inaugurated on Monday in the city of Alexandria, Virginia (near the suburbs of Washington), in order to expose the culture and rich heritage of the Kingdom in its many facets.

The kick-off of this colorful event, dubbed “Moroccan Days in Alexandria” and organized in partnership with the city of Alexandria, was given by the Minister of Crafts and Social Economy and Solidarity Fatima Marwan and Alexandria Mayor William D. euille, notably attended by the Ambassador of Morocco to the United States Rashad Bouhlal.

In a speech on this occasion, Ms. Marwan said the flagship event is “the opportunity to make known to the American public the Moroccan ancestral knowledge and the latest creations of artisans, keeping their authenticity adapt to contemporary taste and modern touch. ”

“This is a first experience which will undoubtedly be followed by other initiatives,” she said, adding that the organization of this event comes within the framework of the constant support of the Ministry of Moroccan artisans, under the leadership of His Majesty King Mohammed VI, through the development of their products to potential markets, particularly the United States with which Morocco is bound by a free trade agreement since 2006. For its part, the Mayor of the city of Alexandria William D. euille stressed that this event falls in line with the historical relations linking the United States and Morocco, including the Treaty of Friendship, the oldest ever signed by Washington with a third country, is celebrating its 228th birthday.

The US official, who said he paid an official visit in several cities and regions of Morocco in February, welcomed the efforts of the Kingdom to promote the handicraft sector, which reflects, in his “inheritance rich cultural and artistic tradition of all Moroccans. ”

This major exhibition, which runs until April 30, includes 12 booths featuring a variety of crafts (furniture, pottery, jewelry, carpets, silverware, food …). It will be marked by the opening of a permanent showroom dedicated to the Moroccan craft in the greater Washington region.