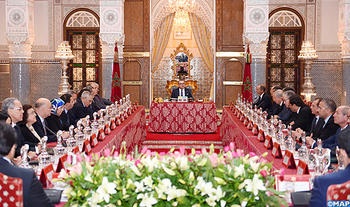 HM King Mohammed VI chaired on Thursday at the Royal Palace in Fez, a Council of Ministers.

Here is the translation of the announcement published on the subject of which was read by Mr. Abdelhak Lamrini, spokesman for the Royal Palace:

“His Majesty King Mohammed VI, may God assist, today Thursday 8 Rabi II 1436 AH, corresponding to 29 January 2015, at the Royal Palace in Fez, a Council of Ministers during which it was taken for consideration and adoption of four draft organic laws, a draft decree and number of international conventions, in addition to several nominations for high office.

The Council of Ministers has thus considered and adopted three organic bills dealing respectively with the regions, municipalities, provinces and prefectures. Repositories of these projects proceed from the High Royal guidelines for the establishment of an advanced regionalization in our country as a base to spend the rules of good governance, local and regional democracy, the emergence of elites capable of managing local affairs and economic centers and development integrated economically, socially, culturally and environmentally, in the context of national solidarity.

These projects, developed in accordance with the provisions of Article 146 of the Constitution, focus on the management arrangements for the local authorities of their business, their structures management arrangements, the status of elected within them the skills own regions and other local authorities, competence shared with the state and the powers transferred to them, the powers of advice and presidents, financial and administrative control to which they are subject, the financial arrangements of these organizations and origin of their funding sources.

As part of the solicitude His Majesty the King continues to surround the promotion of the construction of the justice reform and strengthening of the guarantees of judicial independence, the Council considered and adopted the draft organic law on the status of judges. This project was developed under the High Royal Orientations for this purpose, in the light of recommendations for the reform of justice and in accordance with international principles and standards adopted regarding the independence of the judiciary.

This project aims to define the composition of the body of the judiciary, the consecration of the principle of the unity of justice, the organization of the rights and duties of judges and their statutory situations, the establishment of evaluation criteria their performance and a system of discipline applied to magistrates, and the management of the transitional period until the entry into force of all the provisions of this organic law.

Subsequently the Minister of Economy and Finance gave a presentation on the legal effects of the decision of the Constitutional Council regarding the constitutionality of the Organic Law on the Finance Act, which stipulates compliance with the Act Constitution, with the exception of two paragraphs.

The Council also adopted a draft decree on the military, on ” the central establishment and management of storing material ‘under the Administration of National Defence.

In the framework of respect by Morocco of its international commitments and hence the willingness to strengthen cooperation relations with many friendly countries, the Council of Ministers has made the adoption of eight international agreements, supervised by project law.

This is a multilateral agreement on the prohibition, suppression and eradication of illegal and seven bilateral agreements, including cooperation in judicial, Public Service, the education and tax evasion.

In accordance with Article 49 of the Constitution on a proposal from Mr Head of Government and at the initiative of Minister of Interior, His Majesty the King, may God assist him, proceeded to the appointment of several walis and Governors.

On a proposal from Mr Head of Government and the Minister of Economy and Finance Initiative, His Majesty the King proceeded to the appointment of Mr. Abdellatif Zaghnoune as Managing Director of CDG Management. See the reaction of Canadians Youth about a young Muslim