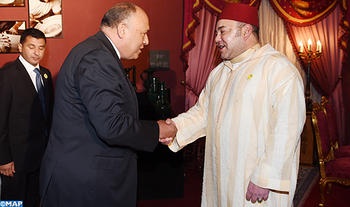 His Majesty King Mohammed VI has a “clear and insightful” vision for the consolidation of relations between Morocco and Egypt, said the Egyptian Minister of Foreign Affairs, Mr. Sameh Shoukry . HM the King a “clear and insightful” vision regarding the consolidation of Moroccan-Egyptian relations in various fields through the strengthening of cooperation between the private sector operators and prospecting investment opportunities offered by Morocco, Egypt said Mr. Choukri in a statement to the press after the hearing granted to him by King Mohammed VI on Friday at the Royal Palace in Fes.
Mr. Choukri, also said he was instructed by Egyptian President Abdel Fattah al-Sissi, to convey the feelings of deep consideration to the person of the sovereign and the people of Morocco, and “the Egypt concern for the Moroccan-Egyptian relations remain strong and recorded in a history of interaction, complementarity and affection binding the two brotherly peoples. ”
He said that this hearing was an opportunity for him to “be informed of SM King vision about the challenges faced by two brotherly countries and the Arab region as a whole and the importance of complementarity and cooperation between the two countries in their relations with African countries. ”
The Egyptian foreign minister has further indicated that HM the King expressed the desire to intensify consultations and bilateral contacts at all levels within a framework of transparency, drawing quality direct links that maintain the leadership of both countries. The head of the Egyptian diplomacy noted, in this regard, preparations for the timing of an exchange of visits between leaders of the two countries.