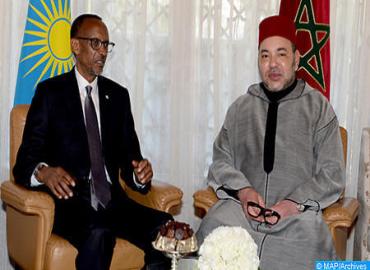 HM King Mohammed VI and Rwandan President Paul Kagame share the same visions and beliefs for the renewal of Africa, Mezouar told the press following the luncheon hosted by the Rwandan president in the honor of HM the King and the delegation accompanying him.

“The Royal visit to Rwanda shows that South-South partnership makes sense that translates into action”, he said, stressing that the Sovereign and the Rwandan Head of State “are two African leaders who belong to this new generation who met and appreciate each other. They decided to move forward together”.

Morocco and Rwanda are linked by strong historical relationship at all levels, Mezouar said, adding that the two countries are determined to further strengthen their ties with leadership and conviction.

“Our two countries have a role to play for our continent to enable it take up the challenges”, the minister said, noting that the agreements and cooperation conventions signed Wednesday in Kigali demonstrate the will and vision shared by the two countries.
MAP 19 October 2016

The official visit of HM King Mohammed VI to Rwanda marks the prelude to a new era in the friendly relations between Rabat and Kigali, Rwandan Foreign minister Louise Mushikiwabo said Wednesday.

“It’s a very special visit for us”, Mushikiwabo told the press after the official luncheon hosted by Rwandan President Paul Kagame in honor of HM the King and the delegation accompanying Him.

Rwanda and Morocco have decided to implement their friendship and cooperation through a series of activities, she said, citing the signing Wednesday in Kigali of twenty agreements and cooperation conventions covering several fields with high added value.

Morocco and Rwanda had decided to give new impetus to their cooperation during the visit of President Kagame to Morocco in June, and “the current Royal visit represents a leap forward”, the Rwandan official said.

Mushikiwabo also emphasized the role and the place of Morocco in the African continent, noting that the Kingdom and Rwanda are set to strengthen unity within Africa to enable it accelerate its progress towards greater economic and social development.
MAP 19 October 2016

Representatives of several Rwandan and Moroccan companies held, Wednesday in Kigali, a meeting to discuss means to strengthen their partnership relations in several areas.

The meeting, held on the occasion of the official visit by HM King Mohammed VI to Rwanda, was an opportunity to stress the importance of increasing contacts between the business communities of both countries in order to set up a win-win partnership.

Speaking on this occasion, president of Rwanda Development Board (RDB), Francis Gatare, stressed that the Royal visit to Rwanda will give new impetus to the Moroccan-Rwandan cooperation.

Cooperation between the two countries is about to usher in a new promising phase at the political, diplomatic and economic fields, he said, noting that the two countries have a huge potential that should be taken into account to raise the level of economic and trade exchanges.

For her part, head of Morocco’s Employers’ Association (CGEM), Meriyem Bensaleh Chekroun, said that the meeting between the Rwandan and Moroccan private sectors reflects the will of the leaders of both countries to establish a strong and innovative partnership.

She added that the official visit by HM the King to Rwanda will be marked by the signing of several cooperation agreements between the two countries in several fields, including logistics, housing, agribusiness and pharmaceutical industry.

“The visit of HM King Mohammed VI to Rwanda is of great importance especially as it is the first one made by the Sovereign to our country,” Rwandan President told the press on the occasion of the official visit of HM the King to this African state.

“We are very pleased to welcome HM the King on the occasion of this visit that shows that relations between our two countries continue to grow,” said Kagame, who praised the level of ties between the two friendly countries.

“Relations between the two countries reached a very good level,” he said, stressing that Morocco and Rwanda are set to give new impetus to these relations in many fields.

HM King Mohammed VI, accompanied by HH Prince Moulay Ismail, arrived Tuesday night in Kigali, on an official visit to Rwanda, the first stage of a royal tour that will also lead the Sovereign to Tanzania and Ethiopia.