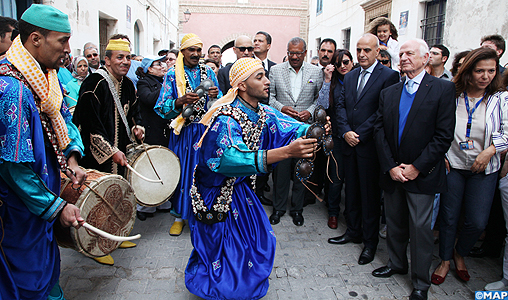 Essaouira- A colorful parade opened Thursday in Essaouira, the ball for four days of celebration and cultural interaction on the occasion of the 18 th edition of the Gnaoua Music Festival world, organized under the High Patronage of HM King Mohammed VI. In a festive and joyful atmosphere, a multicolored human wave crossed the Medina Bab Doukkala to the Place El Menzah, punctuated by folk groups from various regions of Morocco, under the admiring and curious look of the festival audience and onlookers .

The program for this opening night, marked by the presence of the counselor of HM the King and founding president of the Essaouira Mogador Association, Mr. André Azoulay and the governor of the province of Essaouira, Jamal Makhtatar, and more other personalities, also included an artistic residence hosted by Hamid El Kasri and Maâlem Hamayun Kahn Afghanistan, merger interpreted by Mustapha Maâlem Bakbou and the Danish group Mikkel Nords Band, and more typically Gnaoua song interpreted by Maâlem Mokhtar Guinea and Maâlem Abdelkebir Merchane.

In a press statement on this occasion, the artistic director of the festival, Abdeslam Alikan stressed that for this edition, “we have remained true to the spirit of the festival and our mission to promote Gnawa art with its authenticity and cultural burden and ensure its influence on the art scene, all opening on music and cultures from elsewhere. ”

Thus, the festival will invest the most emblematic areas of the city, as the Place Moulay Hassan and the beach for public performances, in addition to the Borj Bab Marrakech terrace for outdoor concerts and Dar Souiri and Zaouia Issaoua which receive the intimate concerts.

As usual, the organizers have shown bold in the realization of the spirit of this festival, fetching music and distant cultures as different as inviting them to merge or mingle Gnawa music. An exercise that demonstrates, each time, that this component of Moroccan heritage synthesizes centuries and centuries of exchanges and intercultural interactivity, especially with sub-Saharan Africa.

Moroccan artists with very diverse musical experiences, also will be on hand, like Hindi Zahra, Aziz Sahmaoui Mehdi Nassouli, Amran El Maleh and Barry (Jauk), in addition Diapa-Zone and Darga groups. The young musicians of Essaouira will be, themselves, offer a window to the general public, through the scene Ouled Mogador.

The artistic program will be accompanied by moments of reflection on Africa and its future through the Forum organized in partnership with the National Council for Human Rights and who registered over the years in the spirit of festival. This year the honor will be the African woman through the theme “Women of Africa: create, undertake”. It will be an opportunity to focus on women entrepreneurs and creators and their role in African social and economic dynamics.

Morocco in charm offensive in the International Tourism Fair of Algiers