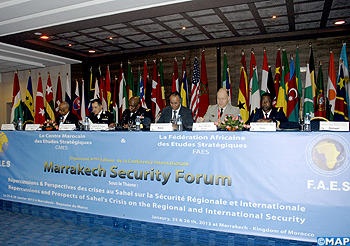 Marrakech- There is danger in delay, alert participants to the 6th edition of the Marrakech Security Forum (13-14 February) to depict the inherently pernicious multiple security threats in Africa and that may corrupting its savings and torpedo any development effort in the continent.

Terrorism, major challenge for many of them, the drug trade, through cyber crime and human trafficking, among others, speakers called unequivocally African countries and the international community to join forces in order to repel these security threats and their sources dry up.

“Urgent action,” was the watchword of the various interventions at plenary sessions held during the first day of this cosmopolitan conclave where participants are extirpated, if only for a moment, their respective memberships to speak the same language and make the same speculation, fears and aspirations.

African United Nations must work twice as hard to contain, shortly security risks in order to eradicate them, say the Special Advisor to the President of the Republic of Cameroon, Narcissus Mouelle Kombi, for whom terrorism is the “overwhelming” threat begins to eat several African countries.

In Africa, there are significant changes, terrorism has become massive and territorial, he analyzed, explaining that the terrorist act at the moment, not only refers to a localized specific action in space, but, unfortunately, in the form of a set of group and occupying a territory.

You have to think the fight against terrorism in a comprehensive framework, certainly, without, however, making litter political, ethnic and socio-economic characteristics of each country taken separately.

Other interventions have reported massive security vulnerabilities in those raging picture in North Africa, where AQIM (Al-Qaeda in the Islamic Maghreb) and other radical groups have taken advantage of the political climate unstable, extending their control over many areas ranging from Libya to Mali, while trying to enter the Tunisian territory and strengthen positions in Algeria.

And point out that the weakness of regional cooperation mechanisms in North Africa is an aggravating factor security threats.

Beyond the implications arising from the turmoil experienced by the Arab world, security vulnerabilities in North Africa would take a large extent, the institutional weakness of some countries, the socio-political tensions prevailing there and order shortcomings social and economic such deprivation, corruption and unemployment, they stressed.

Similarly, they noted, the failure of the “national idea” in some peoples of the region is also something in that the absence of this component undermines any proposed fight against insecurity and instability.

“It’s this idea that allowed a country like Tunisia to redress and prevent slippage in the cradle of the Arab Spring to plunge into chaos,” they argued.

And to note, moreover, that the domination of the spirit of sub-national belonging and tribalism have favored the emergence of a civil war in Libya.

True to its vocation land of welcome and dialogue, the city of Marrakech continues over the years, to consolidate its reputation earth Dating civilizations and mixing of cultures.

Clashes between Moroccan soldiers and ex-militia Seleka in CAR